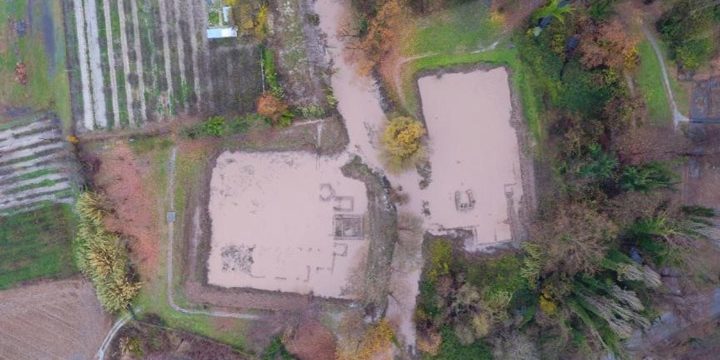 Perhaps the most serious natural hazard threatening the archeological site of Dion in Pieria is that of flooding. This is due to the fact that, from the creation of the ancient city until today, Vafyras river, a navigable river that provided access to the sea during antiquity, passes through the eastern side of the archeological site. The torrent Orlias, which descends from Mount Olympus and passes along the north side of the archeological site, contributes to Vafyras, meeting it shortly before entering the site. During periods of heavy and extensive rainfall, Vafyras overflows, resulting in the flooding of parts of the eastern side of the archaeological site. The biggest problems from these flooding events occur in the Sanctuary of Isis and the Sanctuary of Zeus Hypsistos, as Vafyras passes between them, covering them with water and mud during every significant flood.

During each flooding event and also later, in the water drainage and cleaning phase, the external forces exerted on the monuments cause wear and tear. Additionally, the floods pose risks for the safety of visitors and employees and disrupt the smooth operation of the archaeological site. For this reason it was deemed necessary by the partners of the XENIOS project to add an early warning module for flood to the XENIOS system.

The development of the flood prediction module, required, among other things, to collect information on historical flooding events as well as meteorological, hydrological and topographic data, in order to model the behavior of the water catchment area ending at the archaeological site. In this way, future flooding events will be predicted successfully. The effort was challenging as the area is very complex both geologically and hydrologically, with the water coming from Mount Olympus entering into the ground through sinkholes, and after flowing underground for a large part of the torrent Orlias, in case of heavy rains, reappearing shortly before its junction with Vafyras river. The exact source of Vafyras is also uncertain.

Some of the most interesting facts about the historical floods in the area and the archaeological site of Dion are presented here. The documentation is based mainly on reports and photos provided by the Ephorate of Antiquities of Pieria, but was also sourced  from scientific reports and from articles that were retrieved from the local mass media. Through the combination of sources it has been possible to build a list of confirmed flood events that occurred in the last two decades.

The oldest historical event for which photographic material was found, took place on 10/11/1999. The next recorded flood was on 10/12/2002. Within the next period, three more flood events occurred on 19/6/2004, 26/10/2009 and 24/10/2010, for which only qualitative data without photographic material were found. As seen in the following photos, by comparing the images after the floods of 1999 and 2002 with contemporary photos, one can realize the magnitude of the problem that arises each time a flood occurs. This has a great impact on the site itself but also poses a heavy burden to the Ephorate of Antiquities of Pieria regarding time, effort and cost, for cleaning, repairing of damages and reorganizing the site, so that it becomes available to visitors again in a reasonable time.

Perhaps the most severe and catastrophic flood that has occurred in Dion to date is that of November 17, 2017. It was the result of extreme weather events that hit Pieria, which caused a strong inflow of water from Vafyras river in the archaeological site of Dion. On November 16, 218.6 mm of rain fell and on November 17, 135.2 mm more were added (source: National Athens Observatory Meteorological Station in Dion). At this point it is important to mention that the average annual rainfall of the area for the period 2008-2019 is 643.75 mm.

This flood was caused by the fact that the bottom of the stream was raised due to the transport of sediments, to a height of about 3 meters covering a large part of the northern walls of the site, while part of the metal fence of the area, about 10 m long, fell. Most of the problems were concentrated in the area of ​​the sanctuaries of Isis and the Zeus Hypsistos which were covered by water and mud. Then, when the water receded, the sanctuaries remained covered with mud and were not visible in their entirety. The connection with a metal bridge that existed between the two sanctuaries was interrupted as the bridge was swept away by the water flow.

Figure 5. The Sanctuary of Zeus Hypsistos covered with mud after the flood of 17/11/2017 (Source: Ephorate of Antiquities of Pieria).

Figure 6. The Sanctuary of Isis covered with mud after the flood of 17/11/2017 (Source: Ephorate of Antiquities of Pieria).

Figure 7. The Sanctuary of Isis covered with mud after the flood of 17/11/2017 (Source: Ephorate of Antiquities of Pieria).

Figure 8. The Sanctuary of Isis filled with water after the flood of 25/11/2019 (Source: Ephorate of Antiquities of Pieria).

Figure 9. The Sanctuary of Zeus Hypsistos filled with water after the flood of 25/11/2019 (Source: Ephorate of Antiquities of Pieria).

Figure 11. The metal bridge at the entrance of the Sanctuary of Isis (photo taken on 26/11/2019) (Source: Ephorate of Antiquities of Pieria).

Figure 13. The Sanctuary of Zeus Hypsistos (right) and the Sanctuary of Isis (left) during the flood of 7/12/2020 (Source: Ephorate of Antiquities of Pieria).

From the documentation above it becomes obvious that there is a need to take technical measures to avoid disasters or at least to reduce their effects. Among the latter is the existence of a flood early warning system so that appropriate measures can be taken. The XENIOS project aims, among other modules, to create such a module, that will contribute to the safety of visitors and employees of the archaeological site and will support its smooth operation.

The rights of the depicted monuments belong to the Ministry of Culture and Sports (Law 3028/2002).

The Sanctuaries of Zeus Hypsistos and of Isis are under the responsibility of the Ephorate of Antiquities of Pieria, Hellenic Ministry of Culture and Sports/ Archaeological Resources Fund.

Pilot action of ΚΕ.ΜΕ.Α. for the development of XENIOS UAV Dispersion Module
February 10, 2021

Field observations on the occurrence of floods at the archeological site of Dion Pieria
December 9, 2020