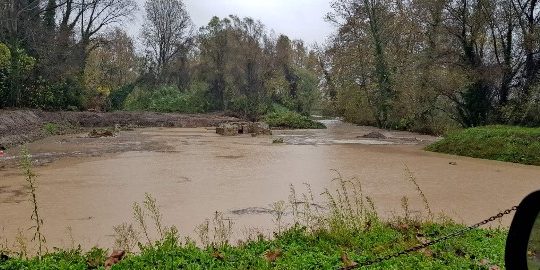 From the moment that the archeological site of Dion, in Pieria Greece was selected as a demonstration area for the XENIOS project, it became clear from discussions with the officials of the Ephorate of Antiquities of Pieria that the main natural risk they face, is flooding. The magnitude of the problem was documented, in addition to oral descriptions and photographs that were made available by the officials (Figures 1 and 2), through news articles and photographs found in the local mass media and social networks. In fact, reports on the most important floods also appear in national media. Additionally, several administrative acts related to the floods in the area were identified (financial aid, flood mitigation project financing, etc.). Thus, the project partners decided that flooding must be a risk for which the XENIOS system should be able to provide forecasts, in addition to forest fire danger prediction that was included in the project’s original design.

Figure 1. The Temple of Isis flooded in November 2019 (source: Ephorate of Antiquities of Pieria).

The monument of the temple of Isis is under the responsibility of the Ephorate of Antiquities of Pieria, Hellenic Ministry of Culture and Sports/ Archaeological Resources Fund.

Figure 2. Vafyras river, flooded in the Temple of Zeus Hypsistos (source: Ephorate of Antiquities of Pieria).

Following this decision, the XENIOS project partners proceeded to collect data on the topography of the area, the climate, its meteorological and hydrological characteristics and, of course, on past floods. A site visit was added to the office work to capture and evaluate the current situation leading to the occurrence of floods. Thus, the source of the river Vafyras that passes through the archeological site was explored, along with the riverbed and the characteristics of the torrent Ourlias (Figure 3) that contributes to Vafyras.  Vafyras was found to originate from small sources fed with water from the alluvial soil of the area, a short distance north of the archaeological site, and has a relatively small steady flow. On the contrary, the water that flows from Olympus to the riverbed of Ourlias disappears in sinkholes immediately after leaving the mountain. Thus, the torrent remains dry almost all year round, with the exception of periods of continuous heavy rainfall (Figure 4). The photos below are indicative of the exploration effort (Figures 5-8). The observations that were made are taken into account in the modeling of flooding in the area, on which the forecasts offered by the XENIOS system will be based.

Figure 3. The Ourlias torrent and the river Vafyras that passes through the archeological site of Dion, highlighted on a Google Earth image (source: Ephorate of Antiquities of Pieria).

Figure 4. The torrent of Ourlias, north of the walls of the ancient city of Dion, in its  usual condition (left) and with a large flow of water (right) that led to the flood of November 2019 (source: Sofia Koulidou, Ephorate of Antiquities of Pieria).

Figure 5. The beginning of the Ourlias torrent bed at the base of Mount Olympus.

Figure 6. One of the sinkholes at the start of the Ourlias riverbed that directs the water that flows out of the mountain to the aquifer.

Figure 7. The point where a second torrent contributes to the riverbed of Ourlias, just before the reaching the archaeological site, further increasing flooding potential in case of a prolonged heavy rainfall.

Figure 8. The abrupt and intense narrowing of the Ourlias riverbed, just before its contribution to Vafyras and entering the archeological site, is also responsible for the lack of capacity to channel a large water flow, and therefore for the occurrence of flood phenomena.

The rights of the depicted monuments belong to the Ministry of Culture and Sports (Law 3028/2002).

The problem of flooding at the archaeological site of Dion
March 11, 2021

Pilot action of ΚΕ.ΜΕ.Α. for the development of XENIOS UAV Dispersion Module
February 10, 2021